First, I drew her on a notebook at work.

As far as doodling at work goes, I have to confess I’m a pro. Mostly because ADHD and long meetings don’t mix, but also because they (The Man!) insisted that responsible adults should have pencils and notebooks on them at all times to write down important things. They basically gave me a loaded gun. Artists are not to be trusted with such things.

This was technically not a doodle, it was a sketch. And it was meant to get her out of my head in a quickly manageable way, at least until I got home and was able to deal with her properly. (I’m going to continue referring to the imaginary subject of my painting as “her”; feel free to consider me delusional and/or be appropriately creeped out. We can also call her “Betsy” if it makes you feel any better. )

So I drew her and it was fun. But it didn’t turn out fantastic, especially since I got bored midway through the experience and half-assed it until I reached a passable state of “something along these lines”. It didn’t matter. I figured I’d sort it out on canvas anyway.

So I got home filled with tremor and excitement and soon ended up pulling my hairs out. I just couldn’t get it right! It’s not like it was some irreplaceable piece of genius anyway – it was just crappy lines scrawled on math paper. Except they had a feeling to them, they had SOUL man, and I couldn’t recapture it. I felt like I’d been given ONE shot at this and I’d wasted it on paper, during lunch break (let’s pretend it was lunch break).

I eventually got it to a somewhat shadeable state and proceeded to add paint to it, but it wasn’t a heartfelt endeavour. I was already beyond frustrated (a.k.a. freaking out) and the whole shading process consisted of me swishing my brush half-manically/half-dead inside. Every brush stroke added yet another severe birth defect to an already impaired creature. I think I put it “together” in about half an hour. It ended up like this:

“I thought you were gonna add red to it,” Loverboy observed.

“Yeah well I didn’t, okay?” I snapped back homicidally.

I went to work the next day, trying to come to terms with the disaster I’d produced with my own two hands. It was fine. Some ideas blossom into the Mona Lisa, others die swiftly on a plastic covered table without ever going to prom.

I showed pictures to friends, explaining all the things that were wrong with it, all the while fishing desperately for positive reinforcements. I confessed how the strokes didn’t communicate well with each other; how the woman stood out like a sore thumb rather than a come-hither mirage emerging from the moving shapes of the background; how I’d kept the silver as a midtone but, in bright light, it glimmered stronger than the white highlights themselves. How it was a piece of crap altogether, you know, that sorta thing. They contradicted me politely, fumbling for positive words. They had suggestions and forced smiles. It made me want to take a sledgehammer to a roomful of brittle objects.

It was fine. More importantly it was done. Over with. Finito.

I went back home and got out a fresh new canvas, squeaky and pristine. I already had a new idea and it involved lots of bronze, yay. I laid it down and ten minutes later found myself mixing grey paints, with an alarming serial-killer-type sense of calm.

I don’t know what changed.

Over the next few days, I meticulously covered up each broken shape with a matte blue-ish grey. Moving on to the lines surrounding Betsy, I first tried to follow them closely but quickly decided they were horse doo doo so I took a brush to them and covered the whole thing up like it was a political scandal. With a soft charcoal stick I proceeded to redo the lines slowly, joyfully, unhindered by the pressure of struggling to replicate something I’d previously done. It was both an act of salvaging and correcting, as well as starting fresh with a clean slate. It might seem like a paradox. It was the dog’s bollocks.

I soon had something I didn’t completely and profoundly hate. So I kept on truckin’.

The red was back. The silver was gone. The greys went from blue-tinted to neutral to blue again. I did and redid every piece calmly until it suited my will. I only brought back the silver at the very end, as a subtle lining (a silver lining – ha! see what I did there?).

It took me about a week to finish, as opposed to the frantic minutes it initially cost me. But it gave me back the desire to live, witch it had also initially cost me. It was rewarding. And it looked nothing like what I had in mind when I started: there was none of the dishevelled chaos, a lot less of the randomness.

I guess I’d moved past those feelings sooner than I’d realised. Perhaps, when I first sketched that cursed doodle in my notebook at work, my hand channelled an agitation that died very quickly afterwards. Perhaps I’d enjoyed it, and I enjoyed recognising it later when I followed the rushed pencil lines on paper again. But that was no longer how I felt now and I had no way of forcing that mood back into my hands. And maybe I shouldn’t have tried.

And the bitch was right on all accounts.

You can see more of her or even claim her as your own HERE.

On a related note... 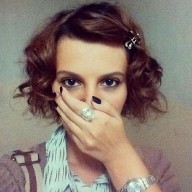